On December 9th and 10th, Swimming in the Shallows by Adam Bock was performed in Studio A as the final student-directed studio lab of 2021. Directed by Tatsu Rivera (‘22), the play centers on four friends; Barb (Chavon Patterson ‘24), Nick (Austin Brannan ‘24), Donna (Georgie Svrcek ‘25), and Carla Carla (Ciara McDonald ‘23). The audience observes each character’s journey navigating their romantic relationships. The play opens with Barb talking to Carla Carla about Buddhist monks who only own eight things. She begins purging her belongings much to her husband’s disapproval. Bob (Jordan Gonzalez ‘24), Barb’s husband, in return begins buying more things for himself and for her. 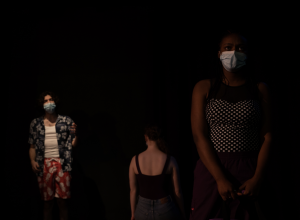 Donna wants to marry Carla Carla, however, Carla Carla develops cold feet towards the idea. When Carla Carla does say yes, the two enter a vicious cycle of calling the wedding on and off. Nick is the only one in the group not in a pre-existing relationship. He instead finds himself stuck within hook-up culture; he meets one guy one week, they have sex, Nick claims he’s in love, it goes nowhere, repeat. This all changes when he sees a shark (Jordan Gonzalez ‘24) at the aquarium where Donna works. Nick finds himself wanting to take it slow – to not give in to his physical urge to have sex right away. 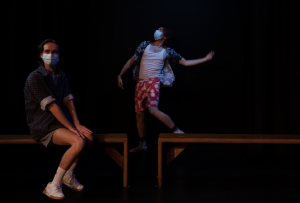 Nick (Austin Brannan ’24) and the Shark (Jordan Gonzalez ’24) in the aquarium.

In the end, Donna and Carla Carla do get married and Barb realizes that it’s okay to have more than eight things but still keeps her belongings under 200 items. Nick and the Shark’s ending is more open-ended. The Shark did follow through with his second date with Nick to the wedding, but beyond that, the audience is left with their own interpretation of what happens next for the two. 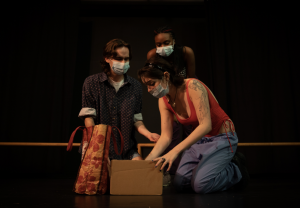 Swimming in the Shallows navigates the messiness that comes with relationships for both parties. It also examines the existence/journey of self when within relationships. The play focuses on how being in a relationship doesn’t mean that each party has to be perfect for each other in every way. It is quite the opposite. One person may find that having fewer material things makes them happy while the other has no desire to get rid of what they already own and instead wants to continue buying things that make them happy – like in Barb and Bob’s case. Neither is right or wrong in their desires, just different. But in the end, that’s what makes them work. Nick is a human and the Shark is an actual shark that works at the aquarium. The two are completely different species. Yet with all the differences and messiness that comes with that, that will be what makes this relationship the successful one. 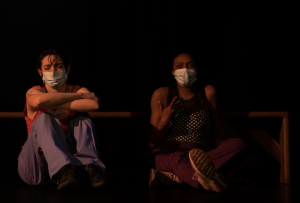