“Common sense should determine the stage movement. Let groups form and un-form, but let it be so casual we’re not aware of it. Do not be specific about ‘where we are’ or who the characters ‘are’; they are who they portray, and they are where they are.” – Edward Albee 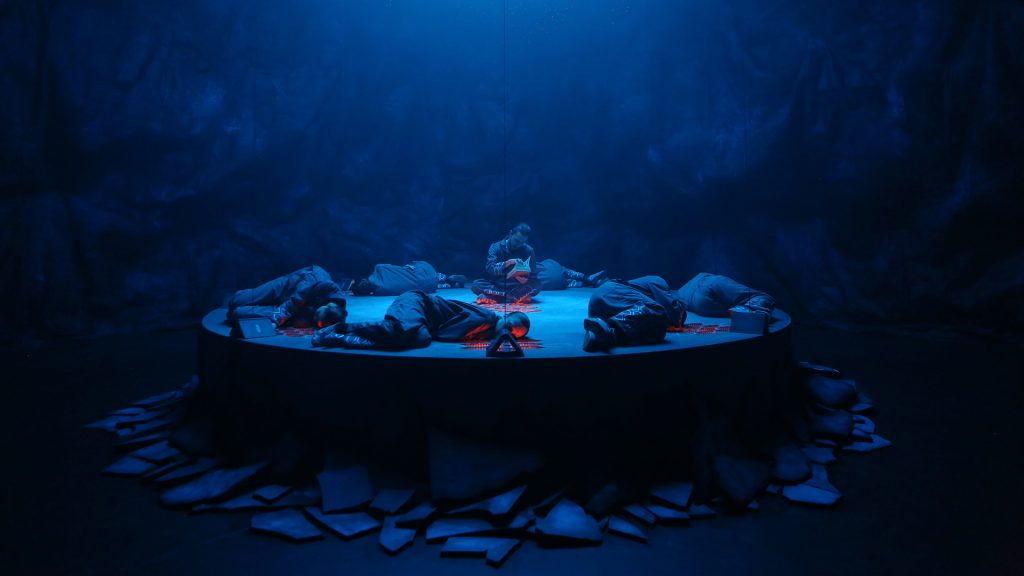 FRAGMENTS: ACT 1: “Let’s Begin Shall We”

The audience inhales a hue of fog as they walk into the performance to see that our little Black Box has been turned into a vast and cavernous, unrecognizable space. It feels as though the play has already begun long before the presence of an audience. An amber glow emitting from beneath the center of the stage flickers and occasionally gleams on the faces of the seven sleeping actors, who lie on a bare stage in head-to-toe grey jumpsuits. Low lit by an artisanal skylight and amber stars sparkling along its upper perimeter, Mark Thurner ’17, sits in the middle of the stage. In this world, he has been permitted only slight movements to flip through his book as the audience files in and is warned to “watch the styrofoam and wire” that line the circular stage like broken rock or burnt firewood. Audience members have not been asked to be silent, but the powerful energy of the room has left its onlookers speechless.

House manager Michael San Roman ’17 makes a final circle around the stage and cues the ushers to shut the doors. The first sign of spoken text begins with proverbs being flung around the circle by the cast of eight. Yet, as the actors speak, the meanings of their words start to disintegrate. The ensemble begins to question why the words they speak are the words they speak and if there is any validity to the proverbs at all. Perhaps there is a logical reason society abides by these proverbs, but Albee seems to suggest we should look beyond these normative colloquialisms and explore the sentiments behind them. 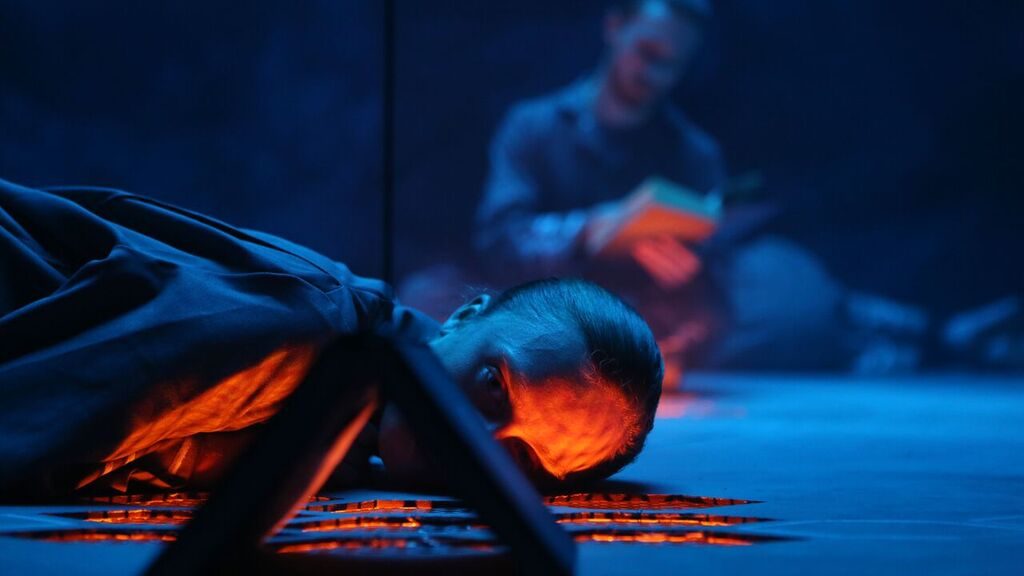 Fragments (originally Fragments: A Sit Around) is a play by Edward Albee wherein eight people, four men and four women, share proverbs that probe memories, stories, and anecdotes from their pasts. While this play lacks a plot, narrative story, or apparent resolution, there is a musical essence to the randomness of the text that helps to tell the story of the complexity of the human psyche. Each character is given the chance to tell about some incident in their lives. The stories range from pets that have passed away, coping with loss, misplaced sexual feelings and abuse, racial profiling, and the inevitability of aging and dying. While they vary in place and plot, they are united by a distinctly genuine quality that evokes empathy from the other seven characters and the audience. The stories of the characters and the ‘arch’ of the show build following their own line of logic until we are left sort of how we began—eight actors in a circle sharing proverbs. 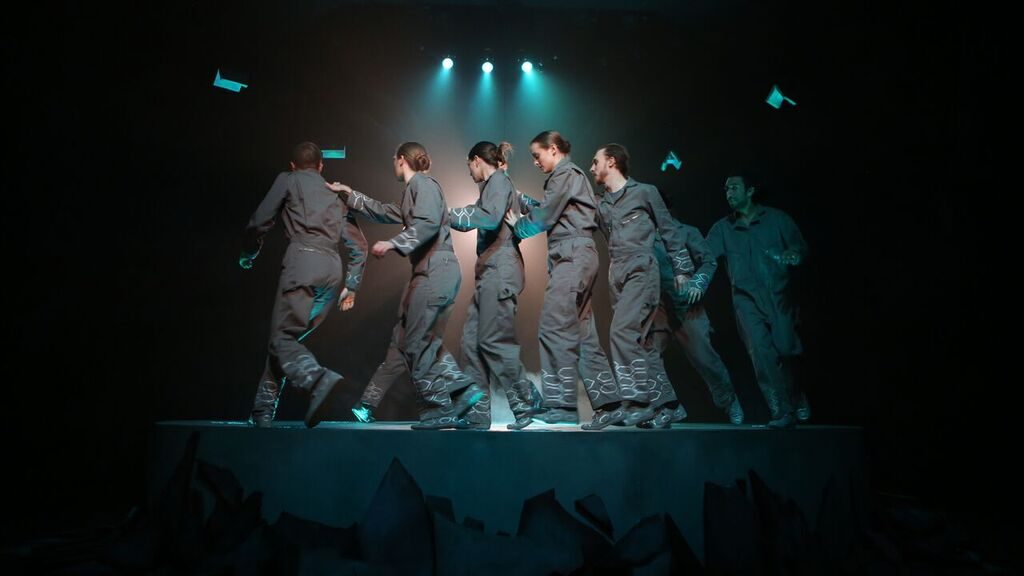 Fragments ensemble scatter in the round. Photo: Sue Kessler

The success of Fragments, lies in its cyclical nature and ultimate totality. At the end of the play, somehow both nothing and everything have happened. Beyond the text, the performances of the eight actors truly creates an unparalleled ensemble. While individual performances were noteworthy, the strength of the piece lies within the ensemble’s ability to construct and maintain their own worlds and the world of the play. There was simultaneously a musical score to the text and a choreographed dance to the blocking. The physicality of the actors was other-worldly. Graham Cook ’19, who played the role of Man 3, reflects on this process; “the play itself works more as a piece of music than as a play in my opinion.” Mark Thurner ’17 (Man 4) adds that along with the music, “the play and text seemed to exist in a dance, sometimes close together, other times challenging one another to create a wonderful and exciting blend of real, emotional interaction, and strange, sometimes wonky interplay.” 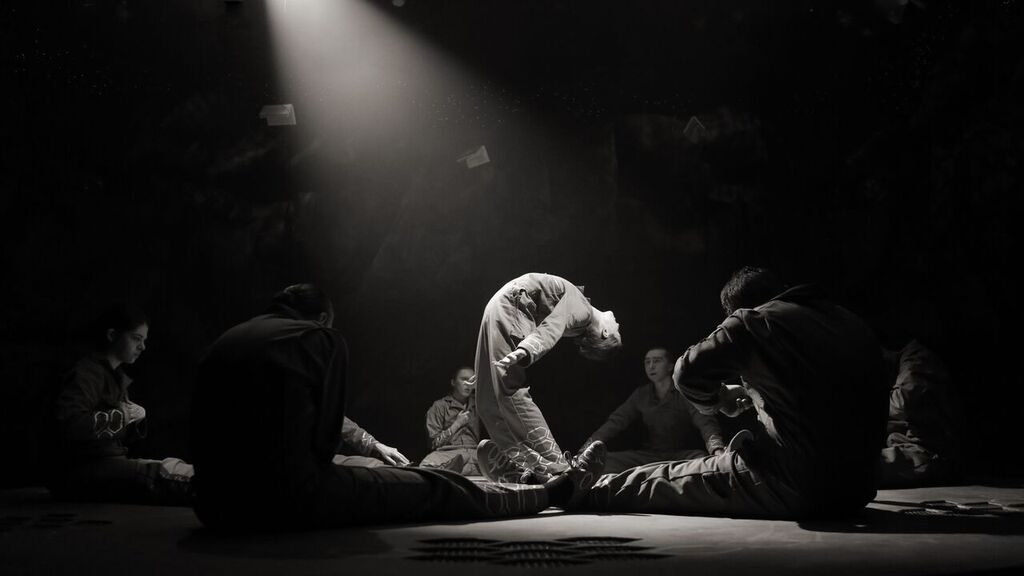 It is impossible to watch the entirety of Fragments without recognizing the incredible technical elements. The physical space, designed by Catherine Heller ’17, was illuminated by lighting design from Jared Klein.  Hues of blue, amber, and white were so beautifully woven in to both the set and lighting. While most of the “music” came from the text, there was detailed atmospheric sounds—dripping water, crackling fire, and voices played backwards—that created a one of a kind soundscape designed by Christopher Monaco ’18. Together, these three design elements constructed a space which was sometimes hard to separate from the ensemble itself. In certain moments, actors and space seemed to breathe together.

Despite the disorienting setting, the play, at base level, tries to familiarize people with the art of conversation. At a time when the average college get-together leads to more Instagrams than meaningful conversations, it seems that the power of the personal is more important than ever. Fragments begs us to start a dialogue about starting dialogues; whether we know how they will end or not. As the director’s note from the program so aptly states, “Edward Albee was a writer who ceaselessly challenged the audience to live their lives to the fullest.” Through this play’s meticulous examination of interpersonal relations, the audience begins to look a bit more closely at how we behave and treat one another. Perhaps, as director Shea Leavis ’17 suggests, “sharing stories is something the human body relies on for survival and nourishment as heavily as it does the air we breathe.” 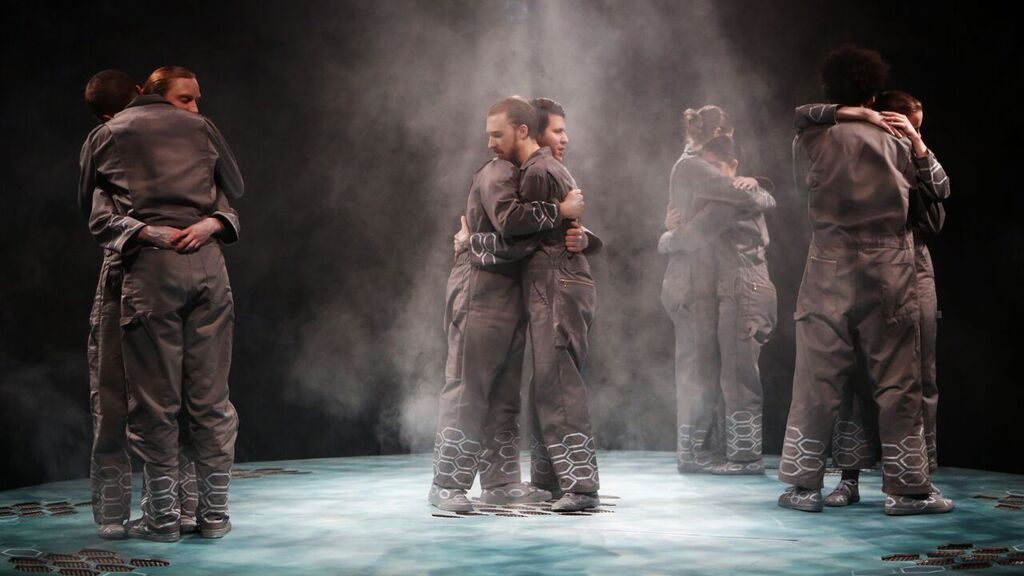 Romi Moors ’18 (Stage Manager): It’s been really heartwarming to watch the cast take these stories from the script and make them their own, and take such care in telling them right. #blessup

Molly Burdick ’17 (Woman 4): The rehearsal process was a ritual; the things we do in the play are rituals; stories have rituals surrounding them and always have; theater was born from rituals.  It was so special to be part of this because it felt like it was one moment in a long line of rituals that try to give meaning to humanity.

Graham Cook ’19 (Man 3): There aren’t any singular moments that you can call out and say, “oh that was great!”  It ebbs and flows from one story, and though there may be parts in the play that stand out to people in the audience, as soon as it’s noticed it disappears.

Sammy Bluth ’19 (Woman 1): My favorite parts of this show were the small moments of connection between actors – the moments that were maybe not seen by the majority of the audience but were so powerful in creating distinct relationships onstage.

Grant Landau-Williams ’19 (Man 2): Fragments has been incredibly rewarding. I’ve never really worked on a show that’s made me think so much about so many things.

Kallan Dana ’19 (Woman 2): I loved this show, and thinking about in hindsight, I am filled with love for the people who I worked with in creating it. This was a generous and supportive team in every respect, and I believe we developed a show that is somehow both unreal and highly familiar.