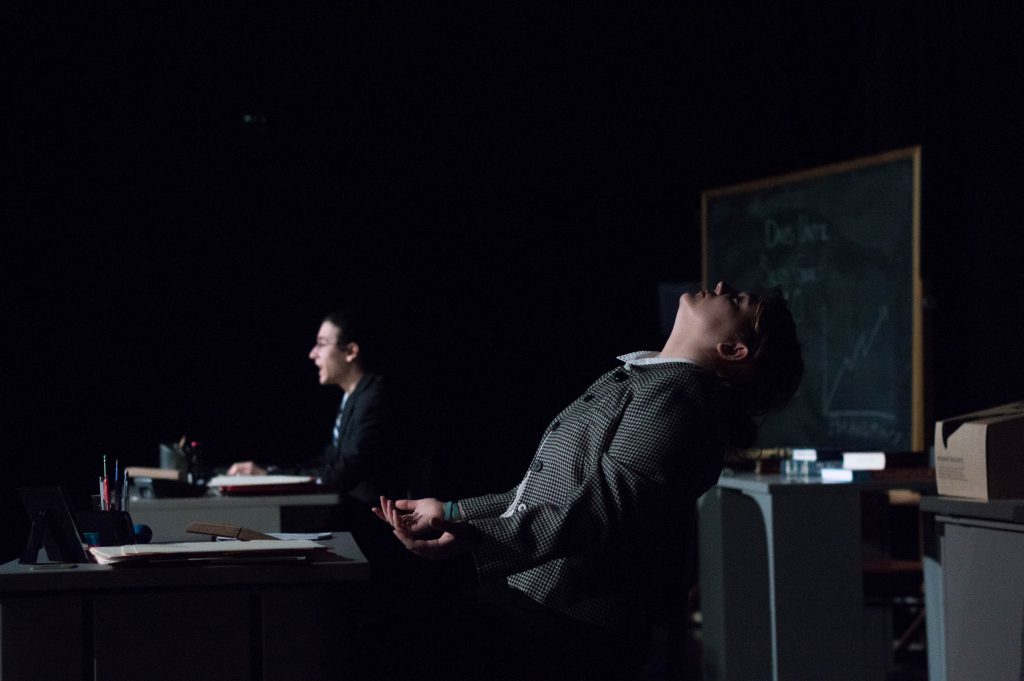 Transformed by soul-sucking florescent lights, the space immediately throws the audience into a flat, corporate world. Three desks sit covered in ordinary office items: staplers, pencils, keyboards, and phones. A fourth is covered with a pile of pink streamers, remnants of a retirement/firing party. This desk belongs to an elusive ‘Margret,’ whose name is written at the bottom of the chalkboard next to the nsumber zero, implying she has made no sales this year. The three ordinary desks belong to office workers Larry, Craig, and Susan. Larry, played by Eli Hersh ’20, sits at his desk robotically typing away on a cardboard keyboard, immersed in the heat of emailing and answering phone calls. Craig, played by Adam Newmark ’20, does the same sort of day-to-day office work, though he’s decidedly more animated. Enter Susan, played by Emily Cross ’19, neurotically going on about being unable to recall her drive into work. 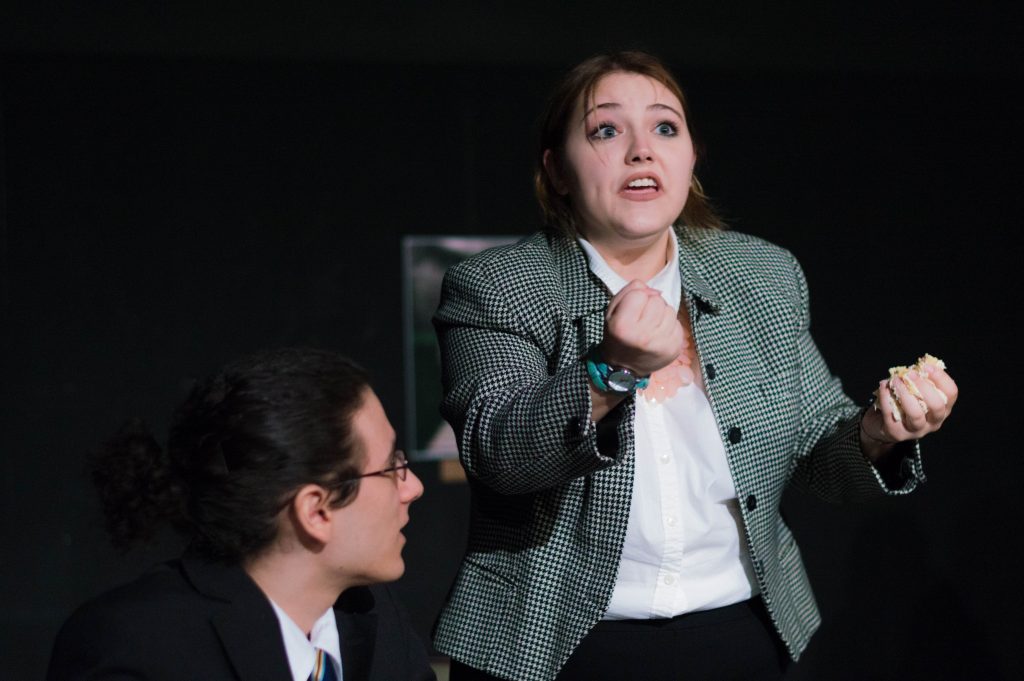 This production of Knights of The Sales Office, written by Hank Greene and directed by Mira Lamson Klein ’18, demonstrates the rigidity of corporate office culture while simultaneously displaying the ways in which monotony can collapse with the slightest prod. After their boss commits suicide, the office is granted a mandated 30-day mourning period. Suddenly, Craig, Larry, and Susan’s only requirement is that they show up—no dress code, no sales goals. Much to Larry’s initial dismay, Craig and Susan quickly exchange their tedious office tasks for fighting army-like rats, building a castle of office supplies, and starting each day with a healthy dose of tequila. 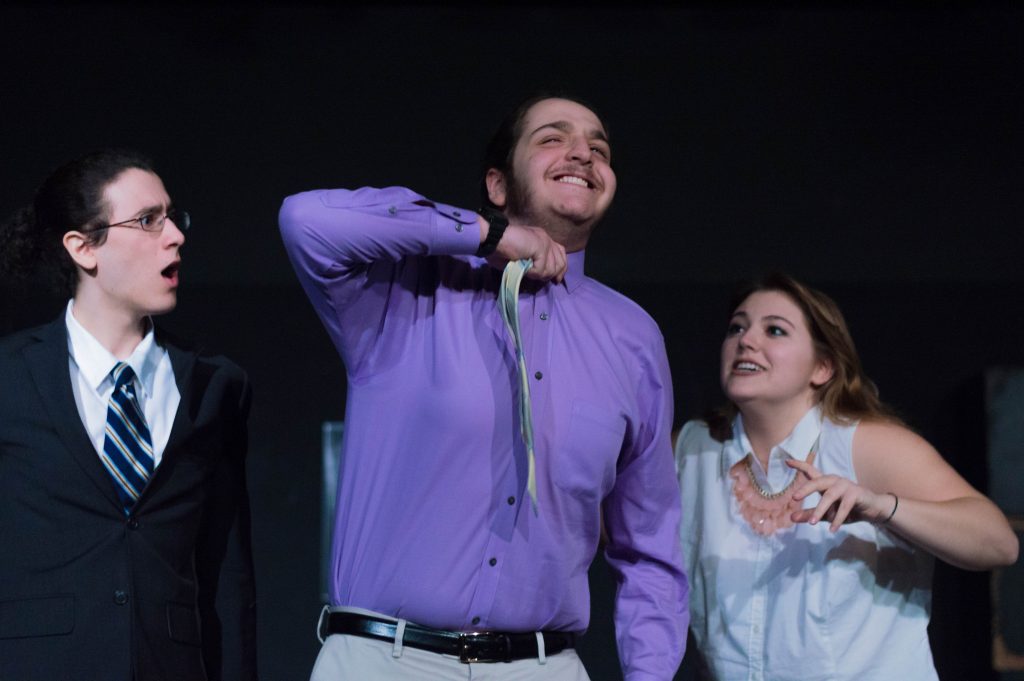 Klein humorously takes a jab at bland office life through an amalgamation of less-than realistic props. A block of cardboard becomes a phone, a pen’s clicker becomes a mouse, and empty space becomes a computer screen. These creative choices give way to a world in which the characters can truly play and shine. Greene’s comedic dialogue is executed brilliantly through Cross, Hersh, and Newmark’s perfected and almost rhythmic timing. HR representatives, played by Carrie Baker ’20 and Julia Guy ’19, interject throughout the piece with highly gestural and astutely timed moments. They read emails sent to Larry, Craig, and Susan as if they are a personification of the computer itself. Additionally, Phillip Merrick ’19, stage manager and light/sound designer, highlights the HR scenes with strong blue lighting, shifting the space from a realistic fluorescent-lit office to a cool, corporate, machine-like world. 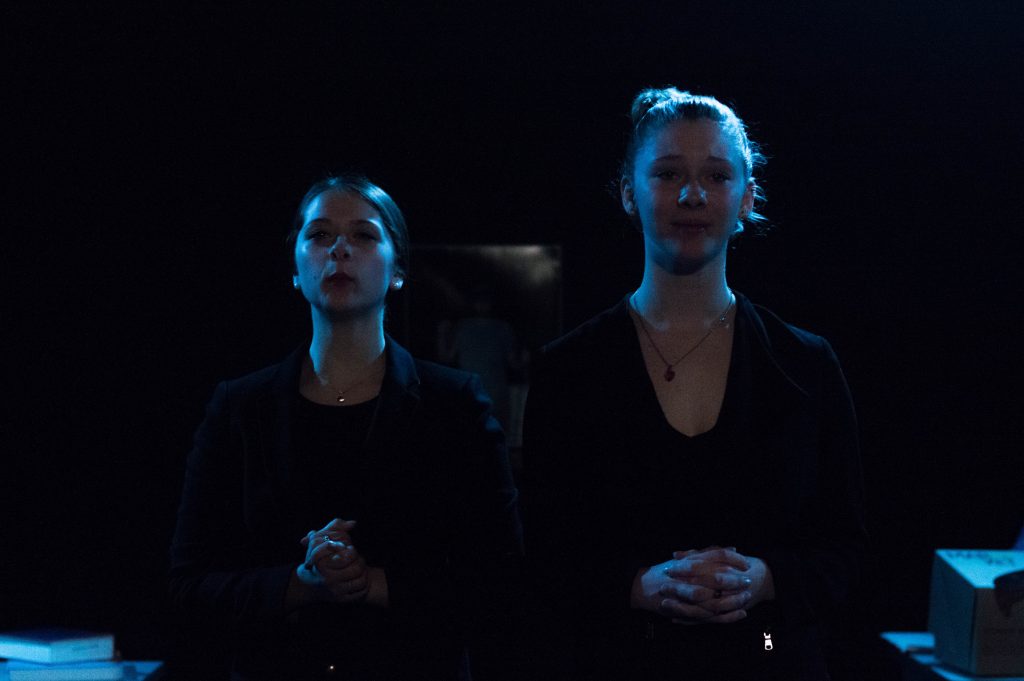 The piece helps us recognize that there is a living, breathing, and emotional person behind each systematic office job. Although it takes the death of their boss to make them realize this, Susan, Craig, and even Larry discover that there is a unique, strengthening force amongst people working the same mundane day-to-day job. In the last few moments of the show, as Larry gives up his obsessive need to climb the corporate ladder and joins Susan and Craig in their castle, the audience is filled with a satisfying sense of community, closure, and even magic. 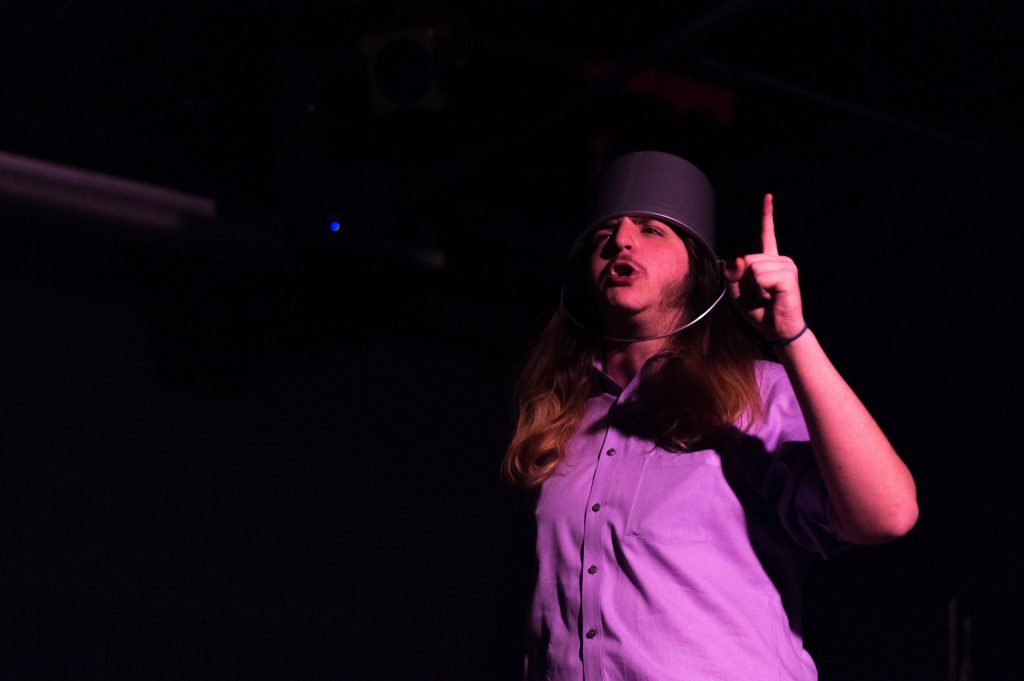