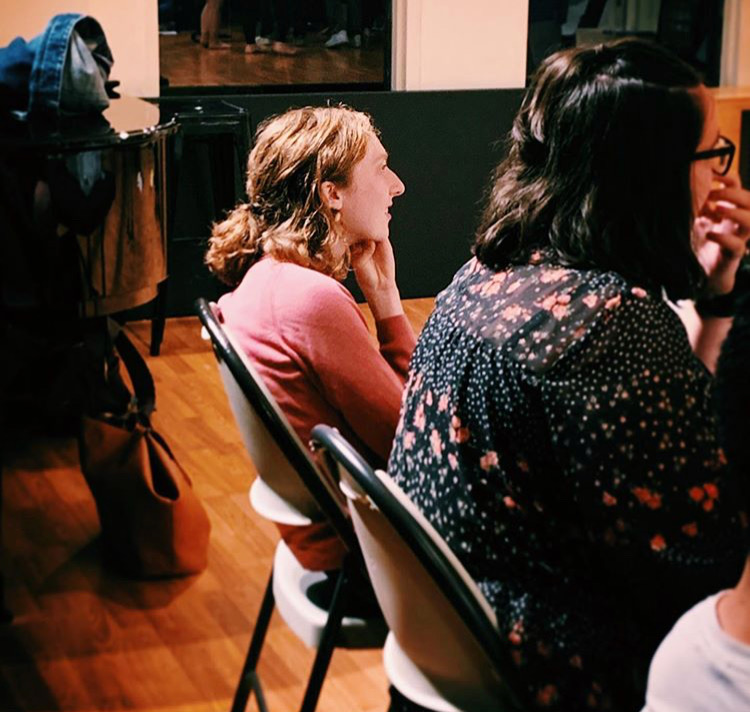 I am a devoted Kallan Dana fan. So, naturally, I jumped at the chance of seeing the newest iteration of her play Playdate and the opportunity to catch up with the playwright herself.

Hailing from Portland, Oregon, Dana came to Skidmore with an existing interest in theater. After a semester on Skidmore’s London FYE program, she began what couldn’t have been a more well-rounded tenure in the Theater Department. Studying both English and Theater, Dana would go on to act in seminar productions such as Fragments, assistant direct We Used to Wear Bonnets and Get High All the Time, be a member of The Sketchies, AKT, serve as the co-editor in chief of the Skidmore Theater Living Newsletter, and write and direct Playdate as a Playwright’s Lab and later as a Studio Lab.

Dana says that upon her arrival at Skidmore, she was focused mostly on acting before taking Julia May Jonas’ Intro to Playwriting course on a whim. “Literally life changing,” she says, as we walk through the streets of Midtown Manhattan.  According to her, Paula Vogel’s How I Learned to Drive was a major inspiration from the class. Jonas, in turn, was affected by Dana’s presence in her classes. “One of the most striking things about Kallan, along with her clear intelligence, writing alacrity, humor, and work ethic, was her genuine interest in the work of her fellow students. She listened intently and generously and gave thoughtful, supportive feedback to every scene,” Jonas says. “This behavior didn’t only show me that Kallan is a good person, it showed me that she is passionate about the art form of theater as a whole, not merely her place within it.” 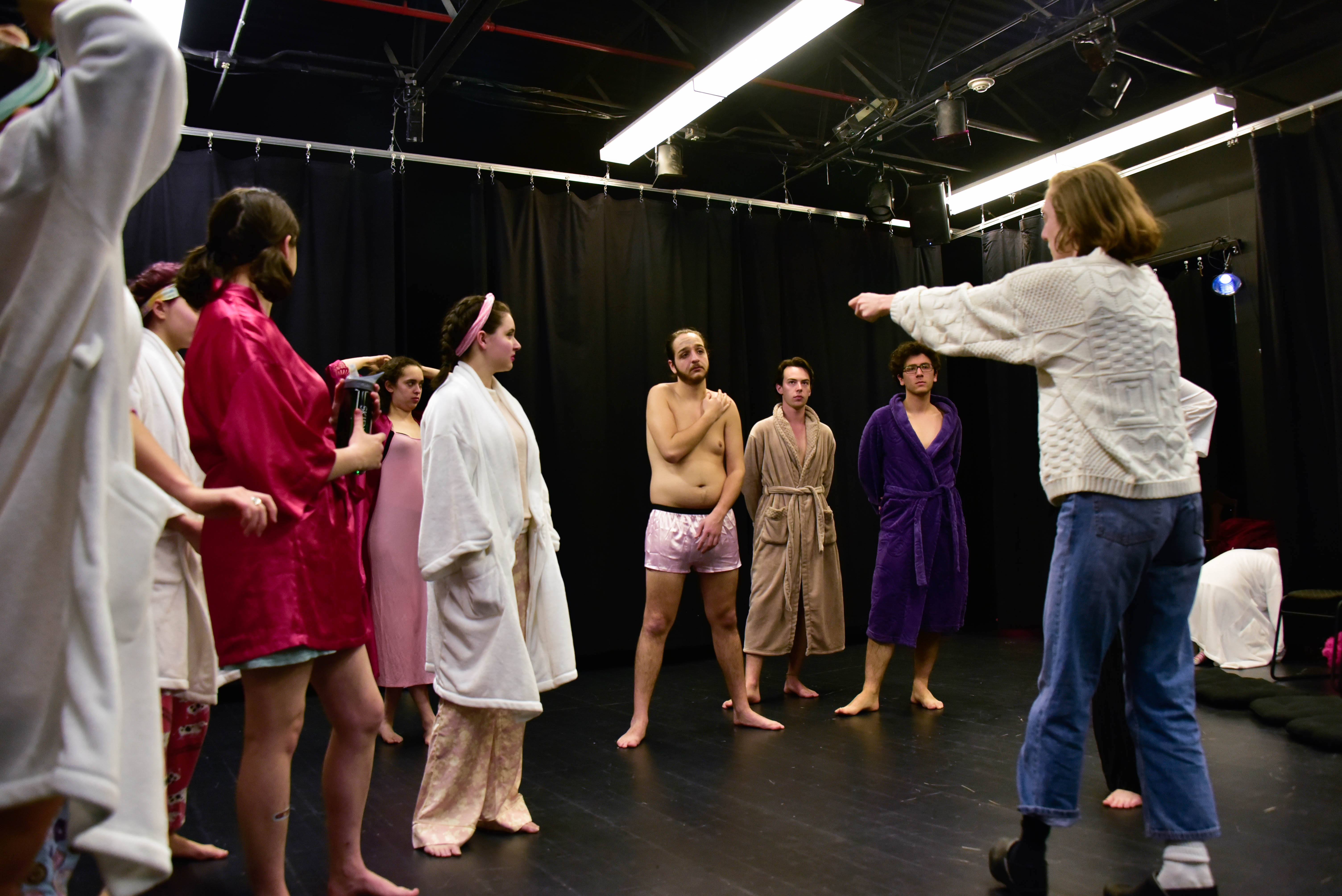 Dana in a “Playdate” rehearsal at Skidmore.

During the Fall of her Junior year, Dana studied at the National Theater Institute in Connecticut, where she would begin working on Playdate. A dark comedy set in the Playboy Mansion, Dana imagines Hugh Hefner’s last day on Earth as he is haunted by ghosts and struggles with his family and memories. After coming back to Skidmore, Playdate premiered as a Playwrights Lab directed by Erica Schnitzer ‘18 in the spring of 2018.

During the summer of 2018, Dana interned at Dixon Place, a non-profit experimental theater on the Lower East Side of Manhattan, where she was able to host a reading of Playdate at the end of the summer. In her final semester at Skidmore, Playdate was featured as one of the spring Studio Labs, directed by the playwright herself. Before graduation, Dana received the Stephanie Mnookin Award, an annual grant to a theater student (with an emphasis on the work of female theater-artists) for them to use towards any projects outside of Skidmore. So when Dixon Place wanted to produce a full production of Playdate, it was a perfect fit. 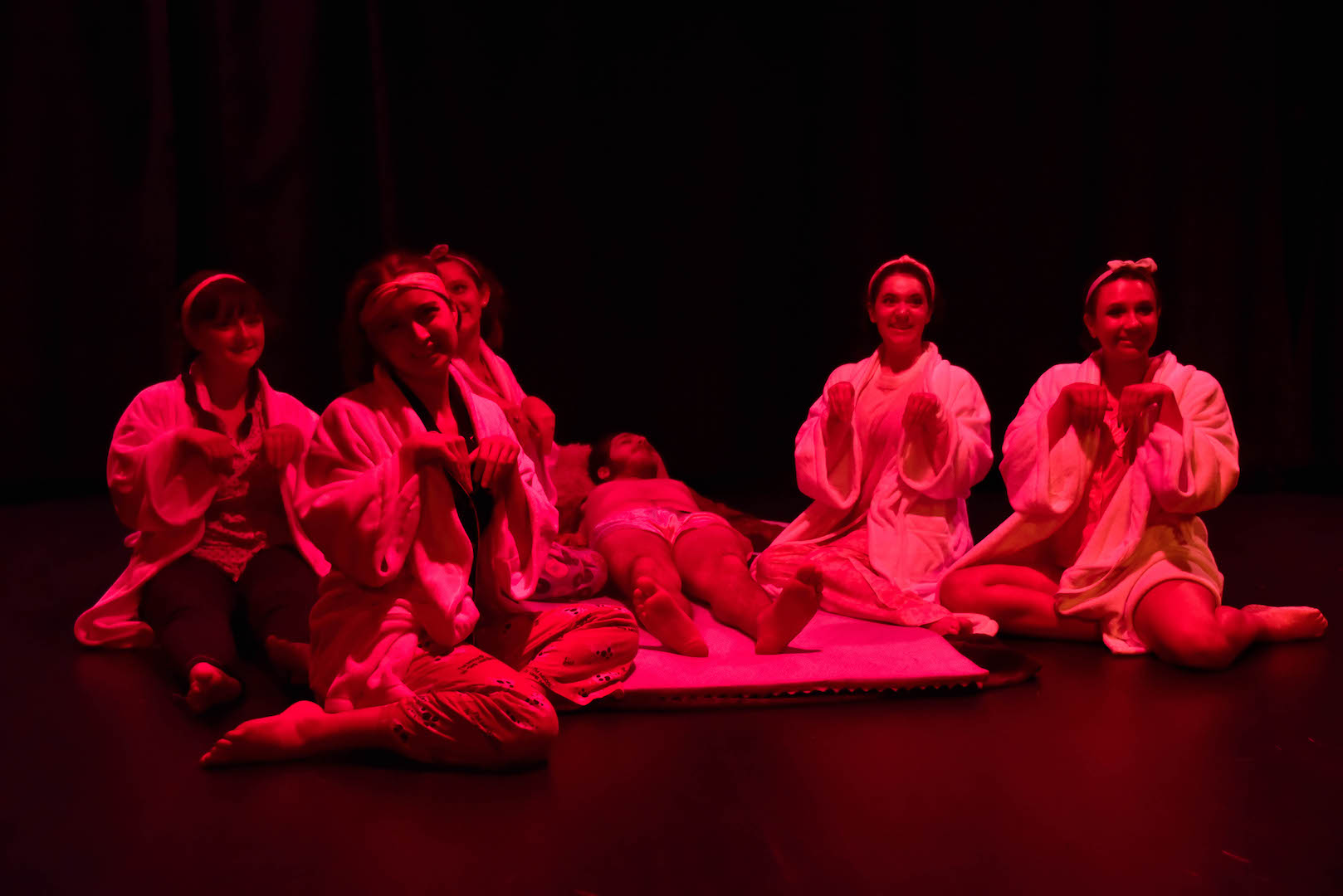 “Oh God, you must be so sick of this play, I’m so sorry,” Kallan says to me on opening night. “Thank you guys so much for coming.” Needless to say, we are far from sick of Playdate, as Skidmore students and alums from far and wide traveled to New York to see exactly what perfections Dana had added. In spite of any doubts about the play’s repetition, she later refers to the first professional production of her piece as “an indescribable gift. It was really exciting to see the play exist as an entity outside myself, as something separate from just the script and my own mind. I really appreciated being able to just be one small part of the entire team of people working to make the production come together.” 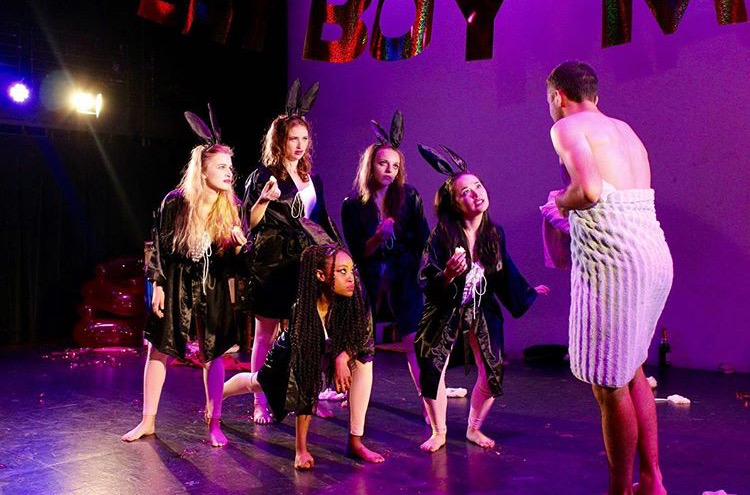 Zoe Lesser ’19, one of the many Skidmore alumni who traveled to see Playdate in New York City, had a unique perspective on the production after being involved in the show in its Studio Lab iteration. “…it was really interesting to track how [Dana’s] staging would then affect her ideas of the play textually. And getting to see how choices the actors made in the room informed everyone’s understanding of those characters was a blast!” Lesser reminisced. “The Dixon Place workshop of the show had a lot of the same heart. The larger scope of the production allowed some really cool developments—age appropriate actors, super evocative scenic design, and even simply just a much larger space that feels more mansion-like.”

The show, co-produced by Dixon Place, 3DaysPrior, and Emily Bergquist, was a commissioned workshop by Dixon Place. It is especially notable that 3DaysPrior, a New York company founded by Skidmore alumni Ziggy Schulting ‘18 and Sydney Tennant ’18 , connected several alumni to the project, such as Tennant, Jake Kanengeizer ’18 and Lucy Consagra ’18. “Skidmore students and alumni have a shared language,” Dana says of this collaboration. “I’ve been able to develop this play because of the massive amount of support I’ve received from Skidmore Theater as an institution and Skidmore students as individuals. The Skidmore alums who worked on this production really gave so much of their time and talent and asked for so little in return. I’m so grateful. And Erica, Sydney, and Jake have been with the show since it was the Playwright’s Lab, so they have fully contributed to the shape it exists in today.”

Kallan now resides in Philadelphia, working at the The Mütter Museum, a museum of medical history. “I love it there, it’s so fun,” Dana says as we settle on going to a Panera Bread after we couldn’t find a Sweet Green. When she’s not working at the museum, Dana works at a restaurant and takes buses to New York City to see plays and movies on a weekly basis. With plans to relocate to New York, Dana is continuing to write and looks forward to the opportunities the move will provide.

Max LoSardo is a staff writer for the Skidmore Theater Living Newsletter.