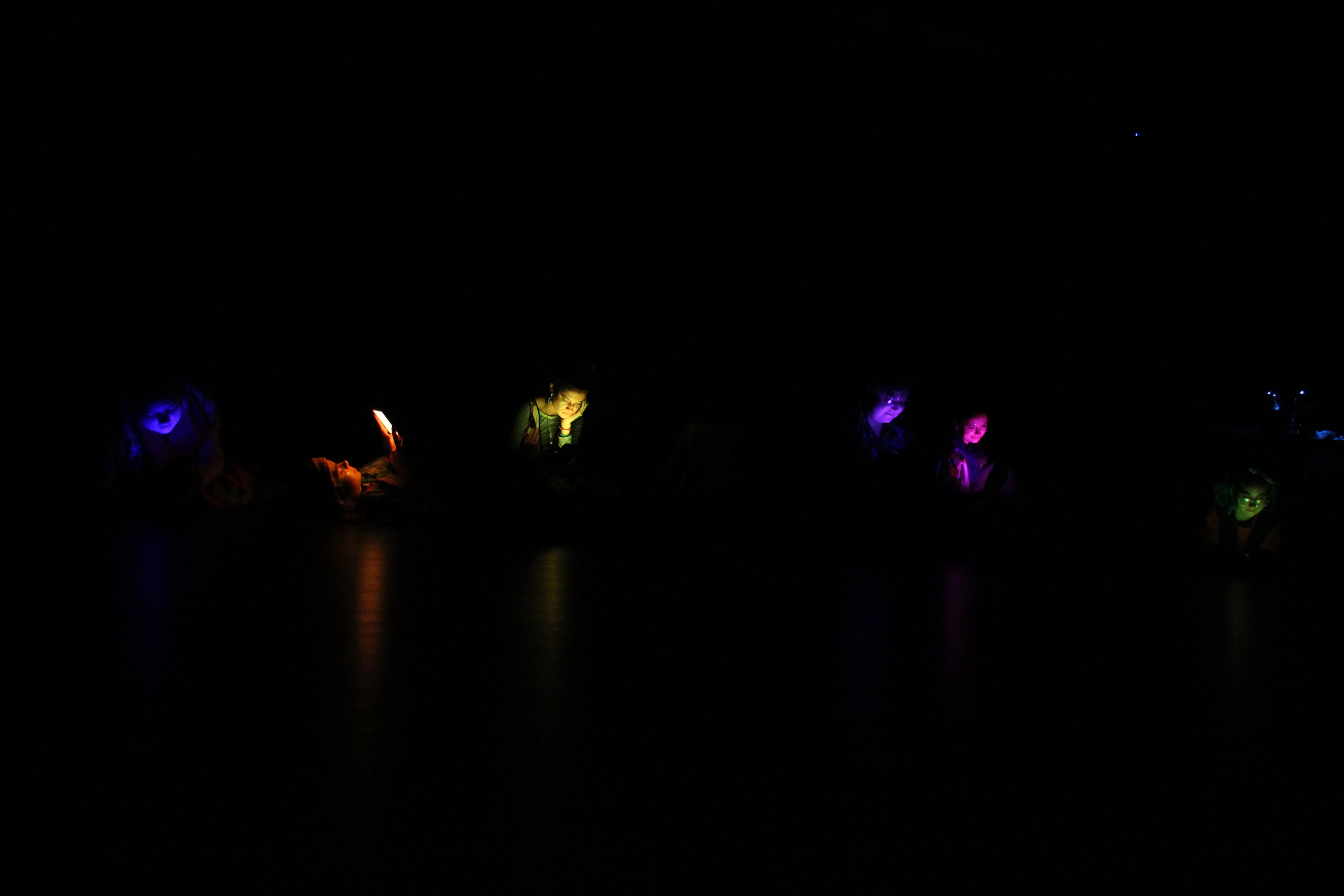 We all have our coping mechanisms; whether it be calling a parent, talking to friends, or making art, we all have our ways of dealing with the adversities that life throws us. Mary Harriman ’20 explores her own personal methods in her new play, Sadboy Hours (This is a Coping Mechanism). Whether it be her relationship with her mother, her friends, or herself, there is a part of Mary’s own journey of understanding herself that anyone can relate to.

When asked to describe what the show was, Harriman calls it a “series of honest, funny vignettes of what it feels like to be a queer, overweight, college student with a shit brain.” Harriman wrote, co-directed, and starred in the piece as the character Mary. The show is autobiographical and was constructed through a series of self-directed prompts over the course of months and years. Examples include: “Write a scene without spoken words. What is said? What isn’t?” and “Write a scene how your friends talk.” 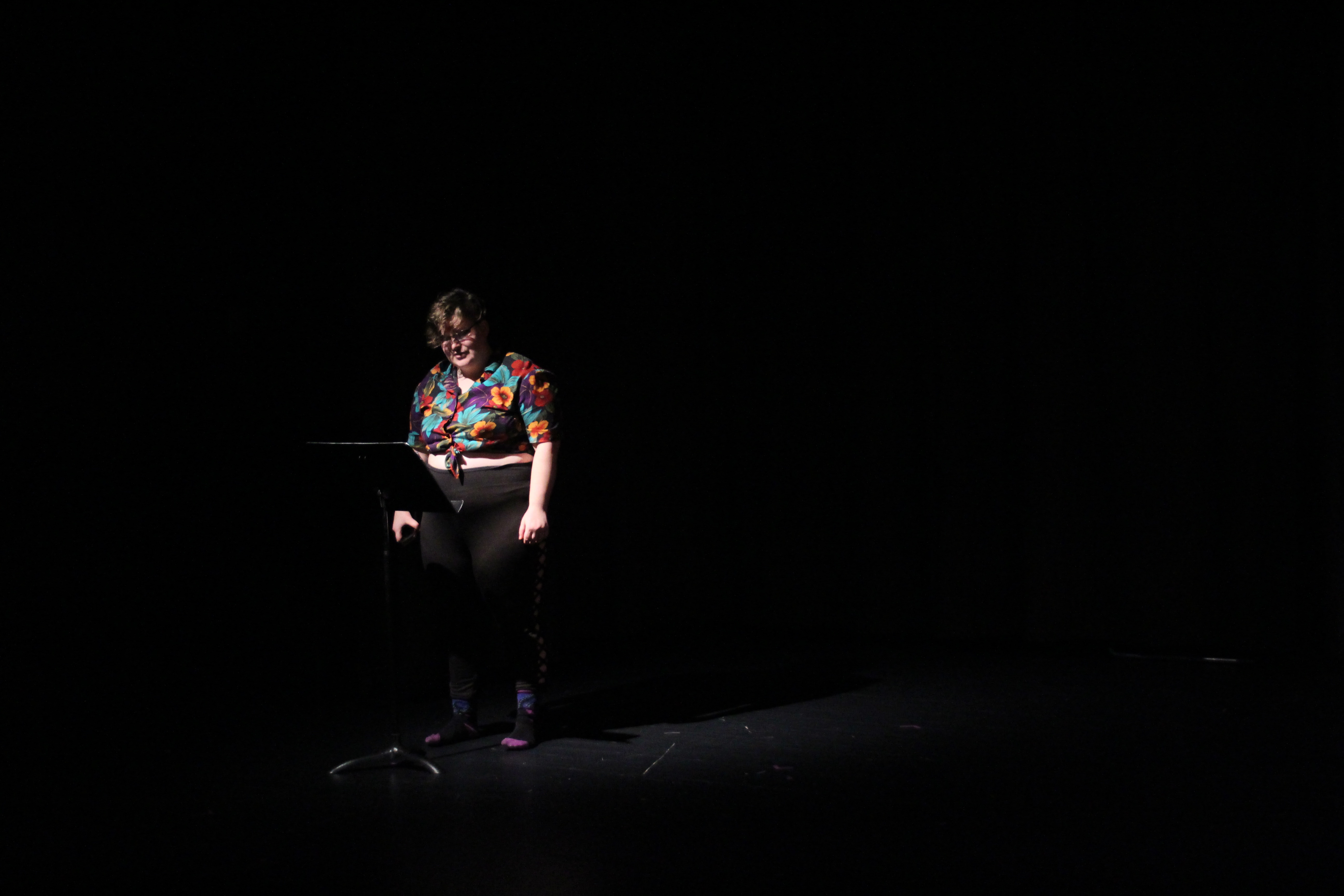 Her responses to these prompts create the play. Each prompt, read aloud by a cast member, introduced and framed the loosely related scenes. At the start of the show, Mary asked: “What are your coping mechanisms?” We then heard a long and winding text, transcribed by Siri, being formed for a friend. And through this interaction with a robotic phone emanating from a screen, we encountered the antagonist of the show: loneliness. 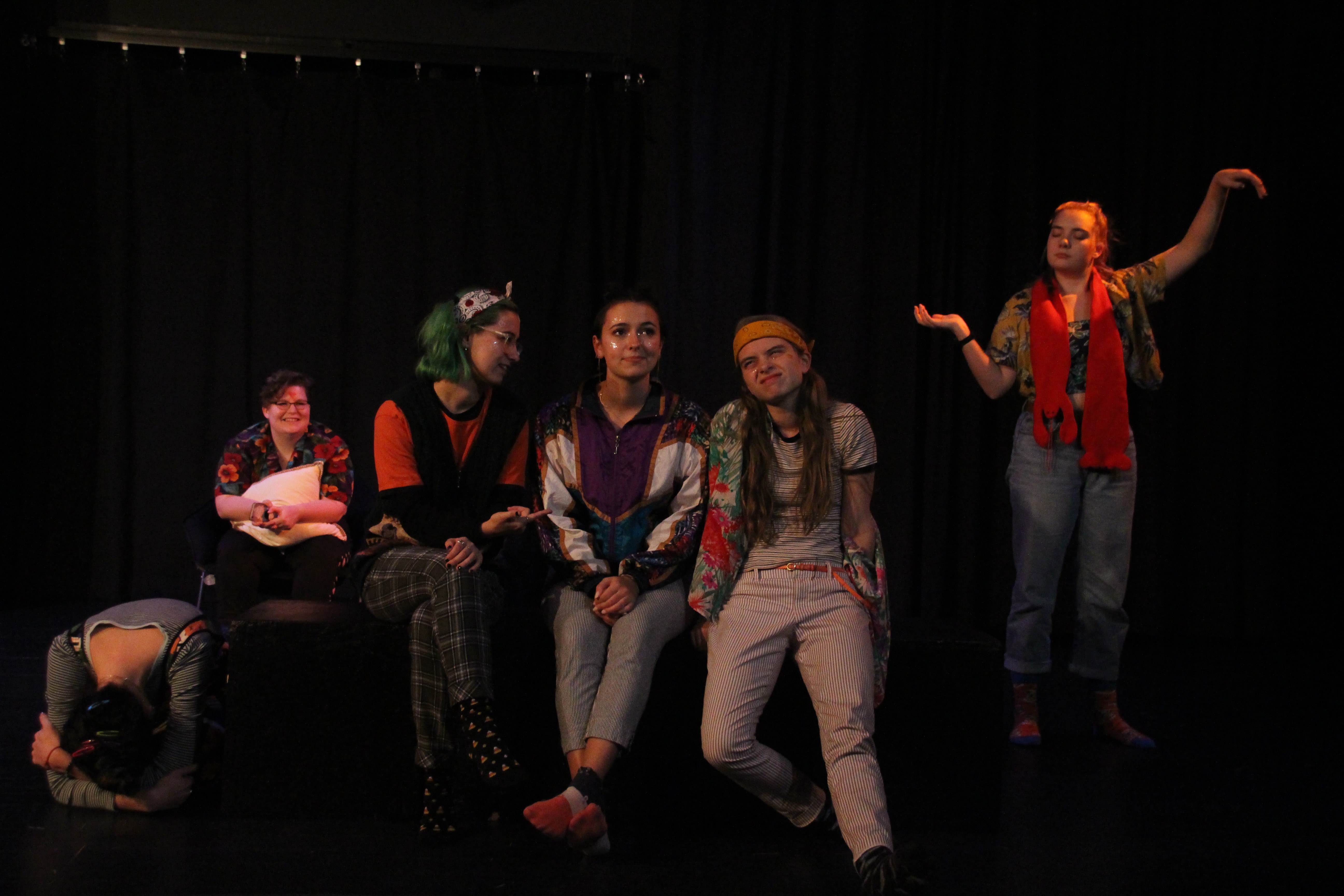 The five actors in the ensemble, played by Callan Daniel ’23, Char Biggs ’21, Erin Arnold ’23, Kathryn Stathakis ’22, and Maddie Aikin ’23, filled in all supporting roles and acted as a chorus. The actors constantly switched characters throughout every scene, creating a panoramic view of the fellow humans in Mary’s life, both those who contributed to and who alleviated her struggles. An actor could go from playing the voice of Siri on Mary’s phone in one scene to an acquaintance at a party in the next.

The world of the production was vibrant and eclectic. The cast was coated in glitter and mis-matched clothing, recalling carefree children’s fashion, campy glam dance parties, and Harriman’s own fashion sense. It was an explosion of color and energy. The lighting, designed by Jessie Hamilton ’20, further created this mood, with the use of multiple colors flooding the stage simultaneously, or dramatic spotlights highlighting actors during soliloquies or emotional moments. 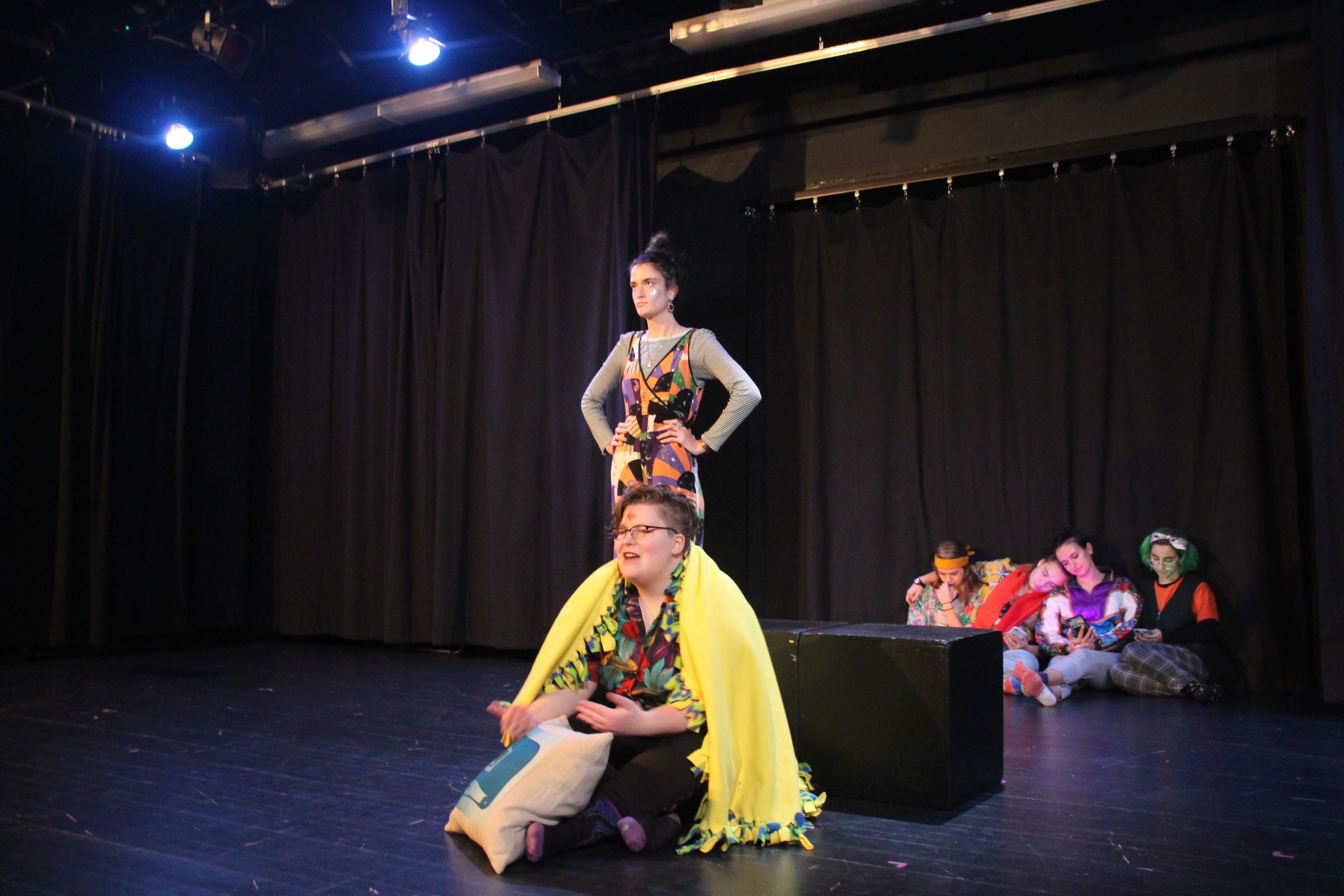 The show is a collaborative directing process between Harriman and Cara Geser ’20. The process was unique since the two directors had separate, but equal responsibilities. Harriman’s role is a playwright and actor who brings the honest vulnerability of the show to life, and embraces the meaning and message in her direction. Geser envisions how the shows exists in a space, working with the big pictures and imagery of the show and staging it into a cohesive picture. The two women working together imagined new roles for directors, pushing the boundaries of collaboration. 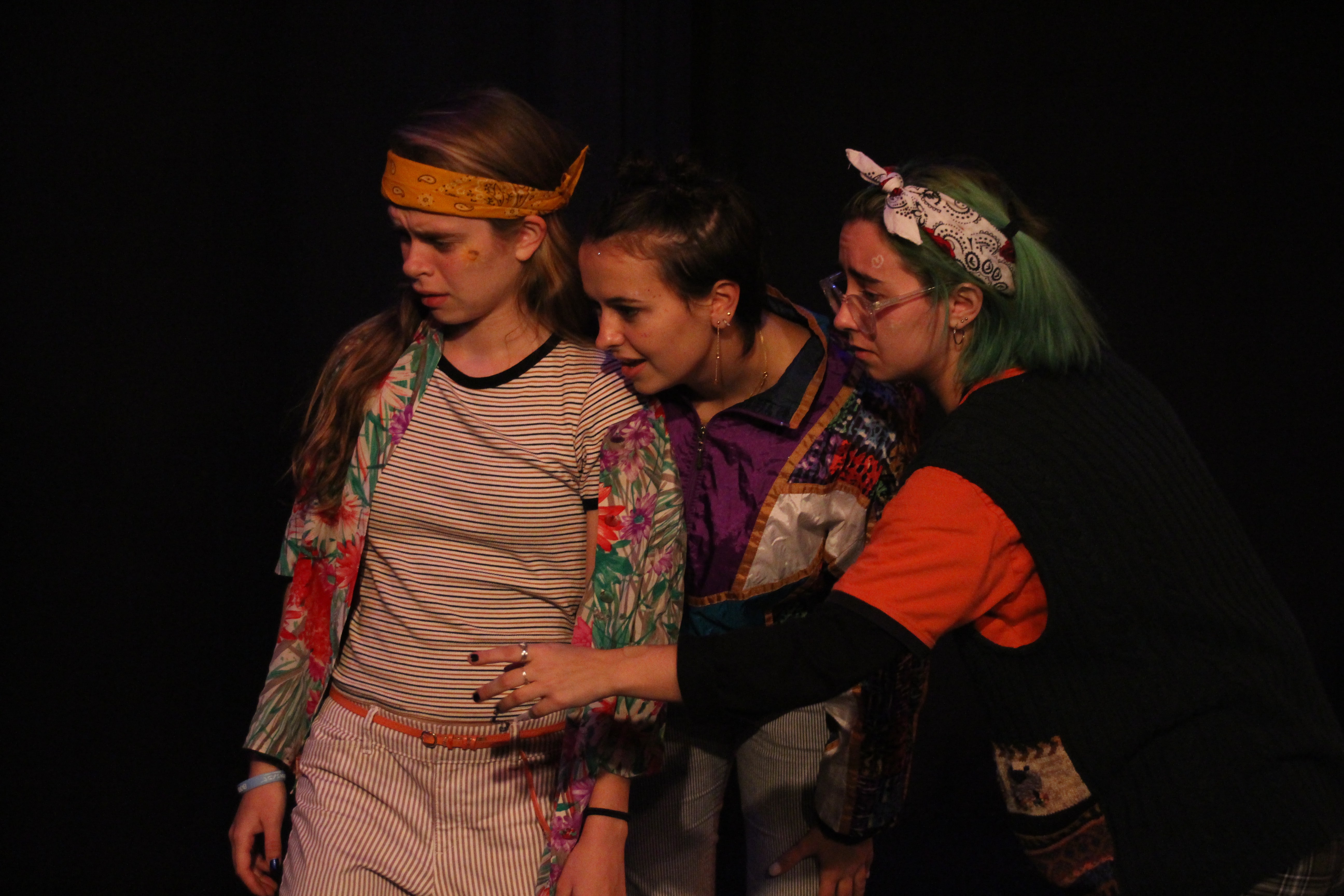 Everything about the piece is deeply personal, and the method of creating this rich honesty for future performances with different teams is innovative and unique. Harriman desires successive productions of Sadboy Hours to feature the same prompts, but the writers or actors should answer them themselves, allowing each company of actors to bring their rich experiences to the production. Although Mary’s struggles and successes may be universally relatable, they are also distinctly Mary, and this format for devising later versions enables future teams to use their individuality in the same way that Harriman has.

The play contended not only with Mary’s personal difficulties, but with the burden of existing in a world shaped by patriarchy, cissexism, and fatphobia when you cannot conform to societal expectations.  Despite the variety of difficult subjects the audience was made to ponder while watching this production, the ending reinforces the protagonist of the show, an antidote to loneliness: love. The final prompt is “How do you say I love you?” We watched as Mary and the chorus said goodnight to her mother after an evening of wine, cheese, and openness, and know that the love in these characters lives will always overcome their loneliness. 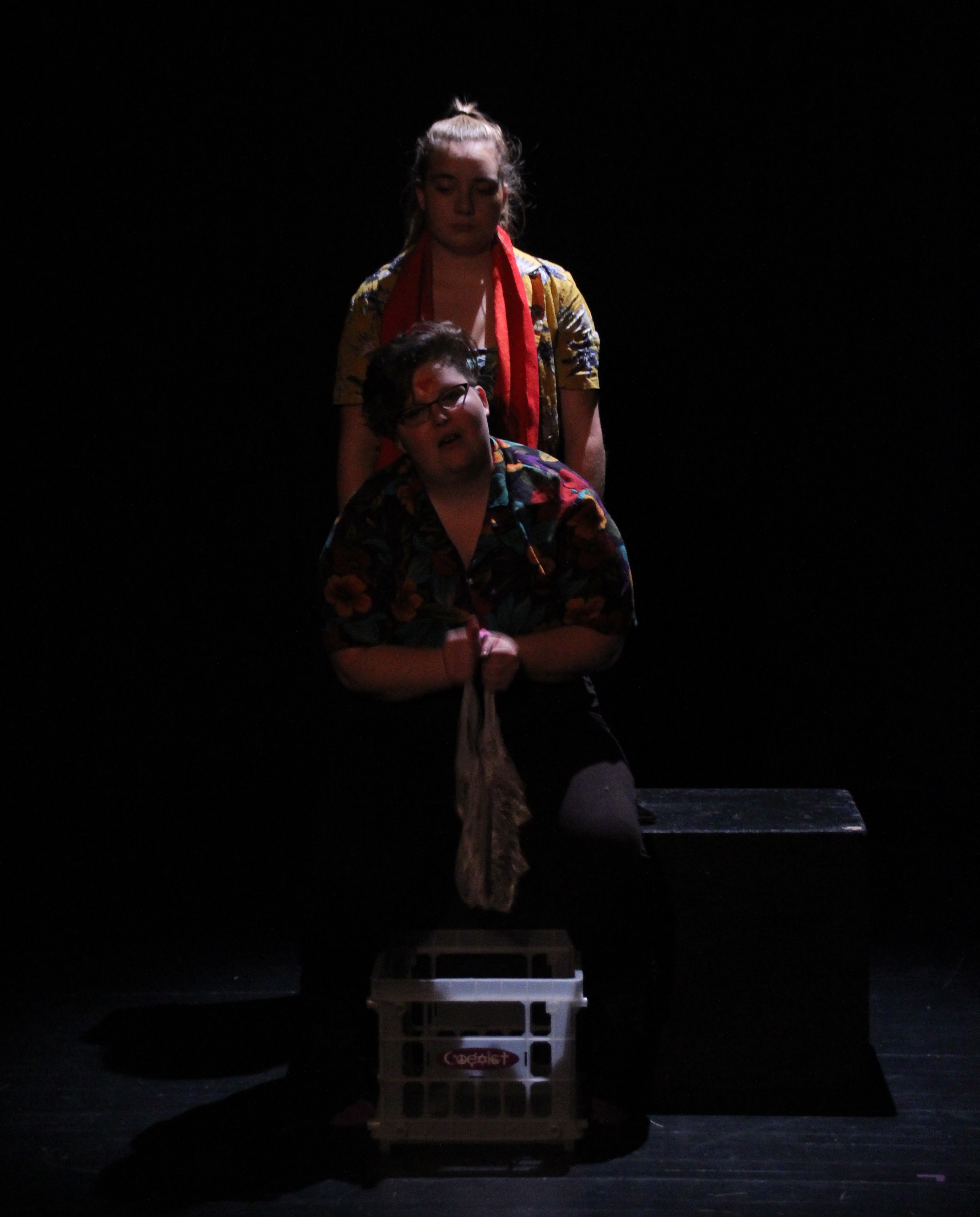 Meg Gray is a staff writer for the Skidmore Theater Living Newsletter.